If you have ever watched the show on TLC called Breaking Amish or the recent show out called Return to Amish you may recall seeing Mary the mother of Abe crocheting on the show.  Her beautiful afghans are one of the highlights of her Amish heritage and several crocheters are asking where they can find the pattern.

These patterns have been brought back from out of publication and are now available to download.
Afghan Parade eBook

The Amish are well known for their quality handcrafted items. In the reality television show Return to Amish and Breaking Amish, Mary (Abe’s mother on the show) is seen in several episodes crocheting afghans and seems to enjoy one particular pattern. In a recent episode Mary even began selling her work.
Several of us who crochet watch the show wanting to know where to find the crochet patterns so we can make an afghan like the ones Mary creates. After doing a little research here are some of the patterns that are similar to the ones Mary is crocheting on the Breaking Amish show.
The first afghan shown on the back of Mary’s couch and in several episodes is the Lacy Chevron which is available for download in Leisure Arts Afghan Parade book here you can also download just the individual pattern Lacy Chevron afghan ePattern instead of the entire book here.
For the printed version of the book you should be able to locate it on eBay at a discounted price here. Splendid Ripple Throw Free Crochet Pattern
There is also a similar  but make sure to read the comments section on the page, as some of the readers have had a few problems with the pattern and made several suggestions for correcting the pattern.
You can also Google or search for ripple afghan patterns that might be similar on sites such as Raverly.
For More Ripple Afghan and similar patterns check out:
Afghan Parade Book on Amazon 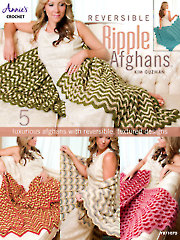