Tales from the Knitting Drawer - The Pink Sweater 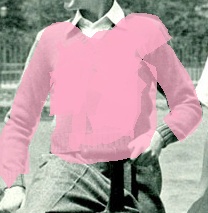 Back in the 1970's as a little boy in elementary school around 4th or 5th grade Ronnie remember his mother knitting everything from mittens hats and clothing for him. Mom was a wonderful knitter but being from Germany she was not completely in tune with the American culture.  Also, having 3 sons she always wanted a daughter.  Ronnie's mom worked day and night and knitted the most beautiful pink sweater and another one just like it in purple.
Ronnie feared that his mother would try to get him to wear it and one day it happened she had Ronnie try on the pink itchy sweater and his little brother the purple one.  Both of them walked off to school miserable and waiting to get picked on.  Ronnie was terrified as he entered the classroom.

He sat in the classroom feeling as if everyone was staring at him. The teacher complimented him on what a pretty sweater

he was wearing.
During recess he discovered that his little brother was more crafty than him and wore a t-shirt under his purple sweater and before entering class he took of the sweater and carried it around.
At the end of the school day Ronnie ran home and tore off the sweater.  He told mom that he would never be wearing the sweater again and mom washed and folded and put the sweater away.
To this day Ronnie still tells the tale of the pink sweater his mother made him wear to school.  It was one memory that stayed with him a life time.
This story as told from my hubby makes me laugh each time I hear it.  Below I have included a free pattern of a boy's sweater to knit please be kind and make in your child's favorite color even if their favorite is pink or purple.
If you have knitting tale to tell please post it in the comment section below....

Posted by Craftdrawer
at 5:45 PM